Under the supervision of Prof. Marco Di Felice and Angelo Trotta, my research activity addresses the design, analysis and performance evaluation of technologies, protocols, and systems for the Internet of Things (IoT), mainly focusing on problems like Energy Consumption, Dissemination algorithms, and Interoperability.

WoT Store: Enabling Things and Applications Discovery for the W3C Web of Things 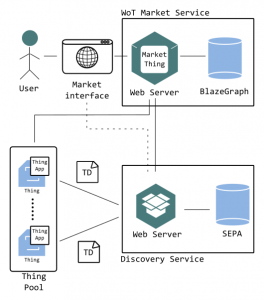 Abstract— The Web of Things (WoT) architecture recently proposed by the W3C working group constitutes a promising approach to handle interoperability issues among heterogeneous devices and platforms, by semantically describing interfaces and interaction patterns among the Things. One of the main advantage of the W3C architecture is the possibility to decouple the description of the Things’ behavior from their implementation and communication strategies, hence greatly simplifying the deployment of novel applications and services on top of it. Starting from such state-of-art, and envisioning a Web of seamlessly interacting W3C Things, this paper focuses on the next steps, i.e.: how to effectively support the discovery of Things? and: how to ease the distribution of applications running on Things? We answer to both the questions above through the proposal of the WOT STORE , a novel software platform supporting the distribution, discovery and installation of applications for the W3C WoT. The WOT STORE allows users to perform semantic discovery of the available Things, to search for compatible applications available on the market, and to install them over the target devices, all within the same framework. We describe the platform architecture and its proof-of-concept implementation, providing two alternative interfaces to interact with our tool: a Web portal, and new modules developed for the popular Node-RED platform. Finally, we discuss two realistic use-cases of the WOT STORE for industrial IoT and home automation systems, remarking the advantages of our solution in terms of deployment costs and interoperability support. 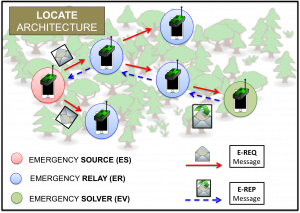 Abstract— During the occurrence of an emergency, being it the consequence of a natural disaster or of human activities, the pervasiveness of user-owned mobile devices (e.g. smartphones, 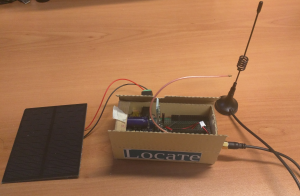 tablets) turns into a precious help to convey data and services to all the people involved. As a result, several emergency-related mobile applications have been proposed on the market; however, they are limited by the networking capabilities of the devices, since they are often based on short-range Device-to-Device (D2D) communication technologies (e.g. the Wi-Fi Direct), or on the cellular infrastructure, which might be not available on the emergency scenario. In this paper, we attempt to overcome both such issues, by proposing a novel Emergency Communication System (ECS) which operates over infrastructure-less phone-based networks, and guarantees long-range D2D communication thanks to the LoRa technology. The system, named LOCATE, includes a mobile application, through which users can convey minimal yet vital emergency-related data, and a dissemination protocol, spreading the emergency requests over multi-hop LoRA links. The performance of LOCATE have been evaluated through: